MDPL, in partnership with Close-Up Productions, has created an archive of digitally recorded memoirs of people who have been part of Miami Beach’s history. Underwritten by the City of Miami Beach’s Visitor and Convention Authority, the archive contains 134 interviews – former mayors, one of the first city planners, hoteliers, restauranteurs, historic preservationists, architects, artists, entertainers, bartenders, musicians, reporters, and a WWII shoeshine boy.

The entire archive is housed by the Florida International University’s Digital Library and is also available through the National Digital Public Library. Browsers can access a selection of interviews and transcripts by clicking on the archives icon at www.miamibeachvisualmemoirs.com, where there is is a link to the complete list of people interviewed to date, at the top of the page.*

Miami Beach Visual Memoirs also has a Facebook page, where new interviews are announced and excerpted, keeping followers updated. There is also a YouTube channel which contains dozens of videos.

“Barbara’s Crusade” tells the story of Barbara Baer Capitman’s campaign to save the Art Deco district in South Beach, using rare footage from an interview filmed with Barbara the year before her death and never shown in the U.S. until now.

“The Story of Rey Mambo” tells the story of Marvin Baumel, whose family moved to the Beach from New York in 1936 when he was 13. He fell in love with Cuban music and became a successful Latin band leader in the 50’s.

On the Miami Beach Visual Memoirs website, visitors can watch other short videos produced by the Hershs: “How Color Saved South Beach,” “Small Town Paradise,” and “Stories of the American Riviera.”

Also on the website is a collection of vintage hotel post cards, cleverly given away by the hoteliers to encourage guests to write home and promote their hotels.

The Archive of the Miami Beach Visual Memoirs Project is online and available for your viewing pleasure. The list is alphabetical. Scroll on the right to get down to the video clip and click on it to play. While the videos are all recorded in HD, to make them viewable on-line they are screened at a lower resolution.  Our partners in preparing the online archive, Florida International University’s Digital Library, worked hard to create an archive with the requisite technology for serious academic research while providing user-friendly access for the general public. The full FIU archive is available here:. CLICK HERE TO VIEW ARCHIVE

CLIPS OF SOME OF THE FIRST VISUAL MEMOIR INTERVIEWS

THE STORY OF REY MAMBO 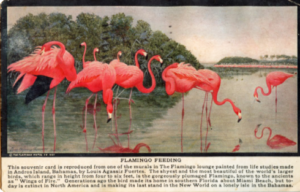 About the Author: David McKinney is an architectural historian and retired museum administrator. He directed the statewide arts network in Virginia, served as the director of