Plotting Power: Maps and the Modern Age debuts at Wolfsonian-FIU

The map: a powerful tool and representation of man-made borders, limitations, and aspirations.

Helpful in strategizing for commerce, exploration, navigation, and – conversely – nationalism, propaganda, and division. Maps are eternally valuable visual assets that show us where we are not just geographically but in time.

For generations, maps have helped societies define themselves, their territories, and their projections of the world around them, becoming artifacts of what we believe in, the places we know, and where we want to go.

The Wolfsonian-FIU’s latest collection-based exhibition, Plotting Power: Maps and the Modern Age, currently on view, explores the political and modern use of maps and map imagery during times of imperialism and war. It features more than 170 maps, globes, and other geographically-inspired materials from around the world.

MDPL spoke with curator Lea Nickless to learn more about the exhibition.

Nickless says it “considers the exploitation of geography in the early 20th century and the effects still felt today,” inviting visitors to explore the roles maps and their depictions have played in both waging war and forming alliances.

In the museum’s blog preview of the exhibition, Nickless cites an excerpt from one of Franklin D.Roosevelt’s famous “fireside chats” radio broadcasts from 1942.

Here, the president was urging citizens to follow along his words with a map for reference.

“This war is a new kind of war. It is different from all other wars of the past, not only in its methods and weapons but also in its geography,” said the former president during the historic broadcast, during which he weighed in on the progression of WWII to an audience of nearly 61 million.

“That is the reason why I have asked you to take out and spread before you a map of the whole earth and to follow with me the references which I shall make to the world-encircling battle lines of this war.”

At the time, Roosevelt was known for having his own ‘Map Room,’ similar to one that was used by Winston Churchill for political strategizing. The former President also had his own presidential globe.

And following along, people were tuned in to their radios and staring widely at their maps in both wonder and fear.

As these ideas of worldly exploration and domination took over the global consciousness, they also made their way onto everyday items. Soon, the map, and geography itself, were incorporated into the innovative designs of items likes radios, toys, and candy wrappers.

“Radios in the 1920s were this incredible, newfangled technology that is hard for us to understand even today,” says Nickless, referencing some of the novelty globe radios featured in the exhibition.

Art Deco, which was by then also expanding across the globe, became emblematic of that worldly yearning for hope and progress following the war and the Great Depression.

One of the items featured in the exhibition is a Deco-style mural from the 1933’s A Century of Progress International Exposition in Chicago. It is a world map depicting the signal reach of a radio station in Pittsburgh.

Together, maps and radios were being used for national pride, literacy, and unity. But with this knowledge of the globe also came the fear of war, destruction, and of who or what lives on the other side of the world.

Nickless says the exhibit breaks through the illusion that maps are “uniquely trusted documents,” rather than reflections of a larger narrative of how societies have spatially defined themselves, others, and their environments across time.

In many ways, the map was both a navigator and a compass toward hope and expansion. Governments, corporations, and other institutions gravitated toward this imagery as a source of empirical truth, power, knowledge, pride, and progress.

“Geographic imagery offered a means to create order out of the chaos,” says Nickless.

“Maps are informed by choices—what to include or exclude, what to emphasize or ignore,” she adds. “When these choices are driven by economic, nationalistic, or political interests, maps can become agents of manipulation with immense power to form global views.”

The exhibit also dives into the use of maps for hate-fueled propaganda targeting marginalized groups across history.

One particular example of this is Ukraine, as it touches upon its history and how it has been negatively affected by these geographic separations, as in the case of Holodomor, a man-made famine in which the Soviet government pressured farmers into collectivization.

Nickless urges viewers to be “visually vigilant” and take note of the many societal themes covered across the exhibition, as these maps are symbolic of the power of design to influence and manipulate, across political and commercial agendas, adding:

“It is really the underlying mission of the Wolfsonian to provide a venue for that kind of exploration of the past, in order to have a better understanding of these patterns that evolve over time so that we can be more fully aware of our present and our future.”

The exhibition will be accompanied by a 100-page, 53-plate companion book, a multi-department effort, and collaboration. It will soon be available at the museum Design Store. 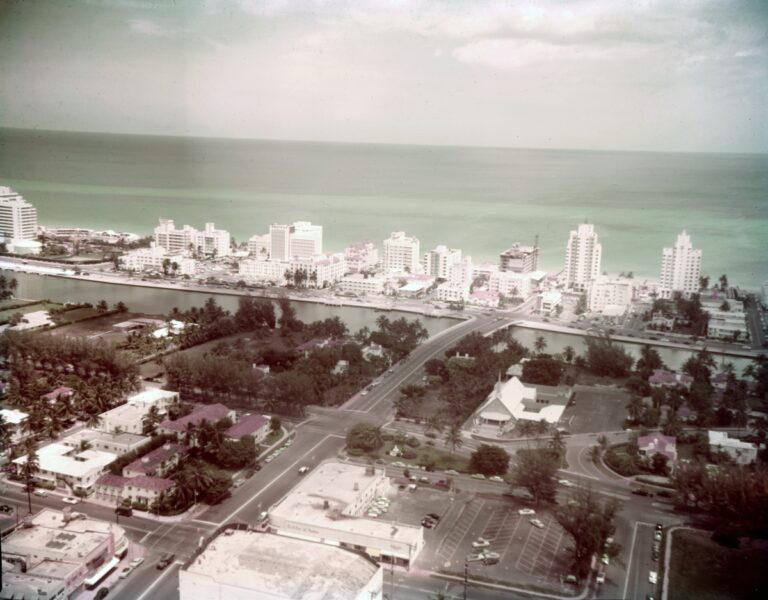 41st Street Through the Years

41st Street is a key thoroughfare in the Mid-Beach section of Miami Beach, although the area in which it was constructed was once known as “North Beach”. Beginning in the