About the Author: David McKinney is an architectural historian and retired museum administrator. He directed the statewide arts network in Virginia, served as the director of the U.S. Interior Department Museum and subsequently as chief of cultural resources in the Office of the Secretary of Interior. McKinney has taught at Virginia Commonwealth University and at Goucher College, where he also served on the Historic Preservation Curriculum Committee. McKinney has consulted with organizations and local governments on preservation issues. He is also the author of numerous articles on art, architecture, and history. McKinney has a Ph.D. in architectural history from the University of Virginia. David is currently on the Board of Directors of the Miami Design Preservation League.

On January 1, 1921, the Miami Beach Aquarium and Biological Laboratory opened its doors to the public. Located on Biscayne Bay at the terminus to the causeway, the aquarium was the childhood dream of one of its founders, James Allison, and part of Carl Fisher’s attempt to broaden the appeal of the resort city by increasing its variety of offerings to potential visitors. As the assistant editor of National Geographic Magazine John Oliver La Gorce noted, more people visited the New York Aquarium than the Metropolitan Museum of Art, and a modern aquarium in Miami Beach would appeal to tourists and encourage exploration and preservation of the region’s wildlife.

La Gorce had chartered the Miami Beach Aquarium Association in 1919 with Fisher and Allison who underwrote its costs and served as president. They named an advisory committee for the association that included titans from industry, science, and museums. Alexander Graham Bell, the secretary of the Smithsonian Charles D. Walcott, and Thomas R. Shipp were among them. The aquarium was directed by Louis Mowbray, the former superintendent of the New York Aquarium. Not only did the association maintain the aquarium, it sponsored research, including trips to document all forms of wildlife.

The Association’s first expedition in 1920 was to Andros Island where Allison, Fisher, and La Gorce went in search of a flamingo colony. They traveled to the island on Allison’s yacht L’Apache (pictured below) and used Fisher’s smaller and faster boat Shadow V to seek out the flamingos in their natural habitat.

To document the expedition, their party included noted wildlife illustrator Louis Agassiz Fuertes and photographer Norman McClintock, who captured what was believed to be the first motion pictures of flamingos. Fisher then had Fuertes’ images printed as souvenir postcards to help publicize Miami Beach and his new Flamingo Hotel. 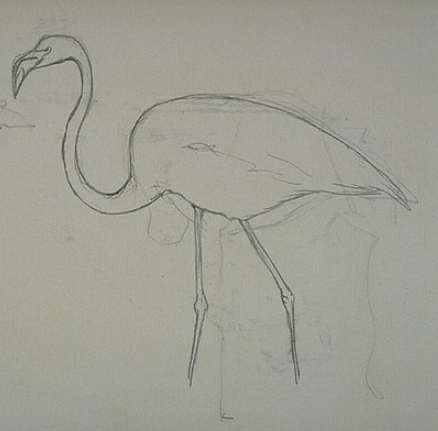 The expedition raised the profile of flamingos as an endangered species and resulted in an arrest of poachers, along with an assurance from the governor of the Bahamas that the laws protecting wildlife would be rigorously enforced and all violators prosecuted. The expedition party also returned with flamingos in the hope of reintroducing them to south Florida. 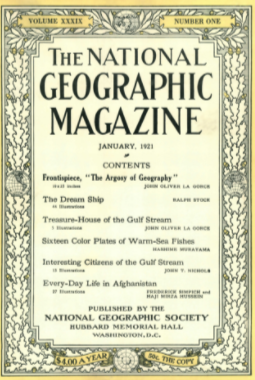 The expedition was publicized as a means of building a national audience for the aquarium. Newspapers noted that this was the first of ongoing expeditions to be undertaken by the Aquarium Association, and the work of the aquarium — the treasure-house of the Gulf Stream — was chronicled in two articles in the January 1921 issue of National Geographic Magazine. A third article penned by Mowbray appeared in the January 1922 issue that outlined the specimens held by the aquarium and work of the association. The publication of these articles coincided with the seasonal opening of the aquarium to visitors. 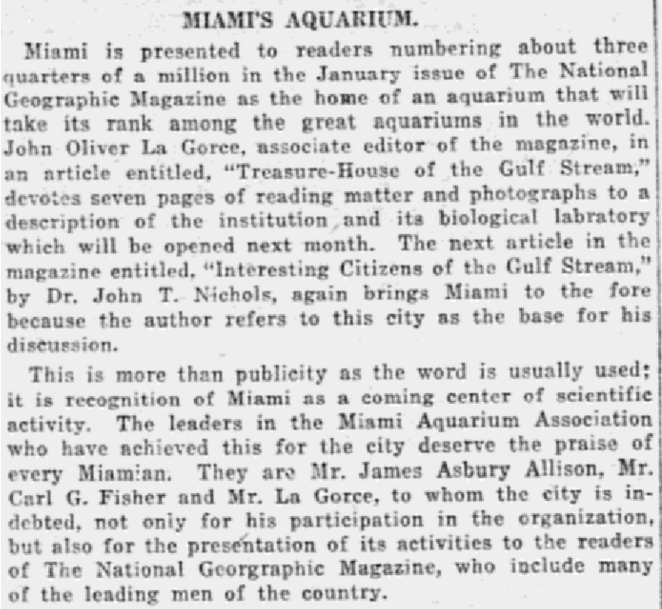 When the expedition returned to Miami Beach, Fisher employed their findings to decorate the new Flamingo Hotel which was scheduled to open to the public on the same day as the aquarium. He engaged Fuertes to provide murals for the public rooms of the hotel. 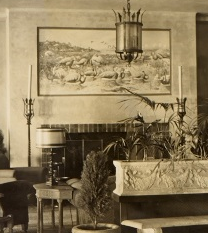 Above: Study by Fuertes for the Flamingo Hotel.

Right: Lobby of the Flamingo Hotel with Fuertes mural.The mural was reproduced in a postcard like the one below. 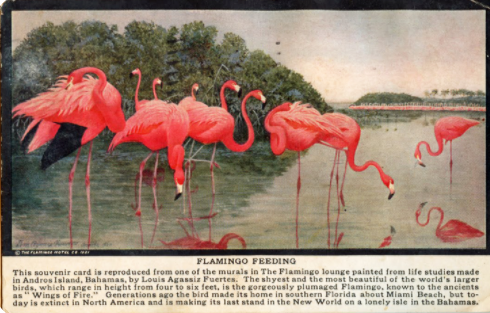 As demonstrated from sketches among his papers at Cornell University, Fuertes also helped to design the hotel’s publicity materials. Fuertes was also among the first guests at the hotel and his signing of the guest register was a press event. 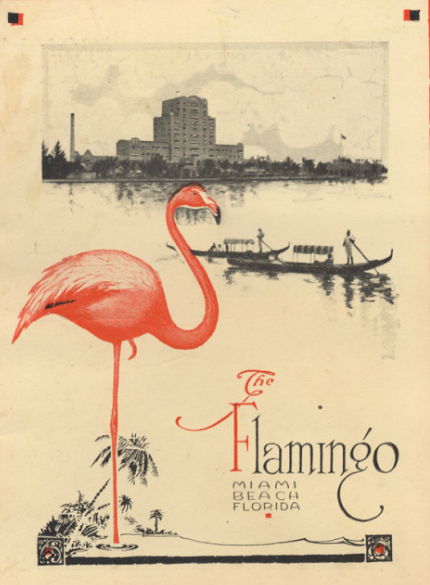 The menus, postcards, and print materials were printed by C.W. Beck, Jr., whose Philadelphia company also published Fuertes’ wildlife illustrations. The hotel manager outlined both their contributions to the Flamingo in a letter to Fisher of May 26, 1920. From this correspondence and that of Beck, it seems that the illustrator N.C. Wyeth was also engaged to produce murals for the hotel. 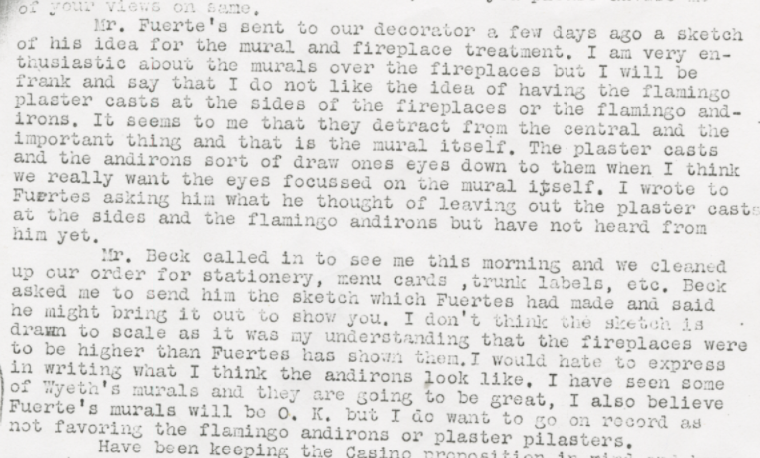 Beck also secured the entertainment for the hotel opening by bringing the renowned baritone Reinald Werrenrath from the Metropolitan Opera to Miami Beach. Fisher referred to Werrenrath jokingly in a letter to La Gorce as that “silver-throated lizard.” 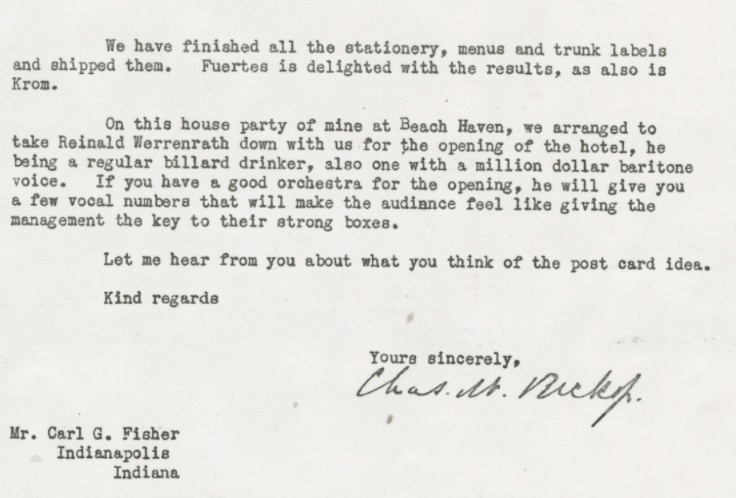 Opening with less fanfare, but with an equal amount of publicity, the aquarium offered a state-of-the-art facility for exhibition and research. The building complex also included laboratories and systems for monitoring and maintaining the sea water in the tanks. 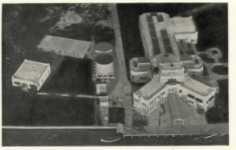 The aquarium’s 53 tanks were lined with coral rock and included sea vegetation. They were lit by skylights and were viewed by visitors from long corridors inside the building. The natural light that was diffused through sea water was intended to recreate the sense of walking on the ocean floor. In addition, the aquarium had two motion picture projectors to portray the “wonders of the deep . . . amidst the weird and restless surroundings of the underwater world.” 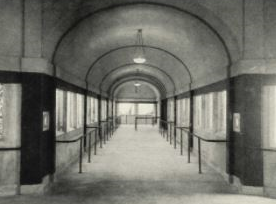 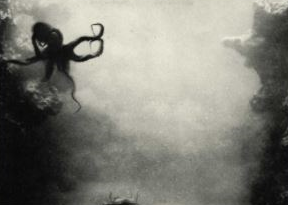 Feeding time was a particular fascination for visitors and the press, who watched the fish eat from the hand of Joe Mackey as he gave them their daily supply of “chopped grunt, desiccated crayfish, and mince crab.” Mowbray wrote in National Geographic in 1922 that Mackey petted “the barracuda much as a child strokes the back of a pet cat, and the fish will, in a seemingly gentle way, take the food from his hand.” 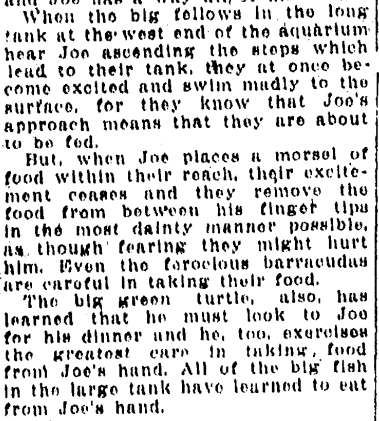 The aquarium was stocked seasonally by its “collection fleet” that consisted of Allison’s two boats, L’Apache and Allison, under the supervision of Captain Charles Thompson. Species were supplemented by private expeditions including one by Fisher’s wife.

A high-profile contributor caught the attention of the New York Times in 1921 which reported that President-elect Warren Harding presented the aquarium with one large turtle. At the end of each season, the specimens were released into the bay.

Rich and famous visitors came to see the aquarium, including the afore-mentioned famed opera singer Reinard Werrenrath, millionaire William K. Vanderbilt, U.S. Senator T. Coleman du Pont, and Postmaster General W.H. Hays, as well as the nation’s newspaper’s editors who were awed by the variety of species and the state-of-the-art facilities. Their interest, no doubt, helped to spur the feature stories written on the aquarium. By 1925, more than 500 articles had appeared in daily newspapers with a combined circulation of 14 million subscribers.

Despite its popularity with over 110,000 visitors in three years, the aquarium was not a financial success. Its first year of operation had expenses of $45,803.23 and a deficit of $32,000. In its second season, the deficit was reduced to $15,500. Also in September 1921, the aquarium became the sole responsibility of Allison when the Aquarium Association was dissolved because its officers could not make its required meetings. In February 1923, a special trolley ticket was created that allowed for visitors to “stop-over” at the aquarium and then return on another trolley. At the end of that season, Allison engaged architects to explore alternative uses for the buildings.

Efforts to increase revenue were undertaken by the city and the Chamber of Commerce. The Chamber provided $15,000 to cover the deficit for the 1923 season. Even the local Boy Scouts Council sought ways to save the aquarium. In January 1924, the Miami Herald reported that attendance had shown a substantial increase, but additional visitors could not rescue the enterprise, and it would not re-open for the 1925 season. 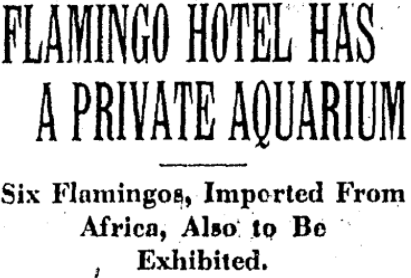 In December 1924, Fisher announced that he was building a private aquarium at the Flamingo Hotel that would be stocked by Captain Thompson, who had been previously engaged by the Miami Beach Aquarium.

Fisher also announced the importation of six prized flamingos from Africa secured by Carl Haganbeck, who supplied animals to P.T. Barnum. As noted in a letter to Edward Bok in 1925, these were to replace flamingos that were captured on the Andros Island expedition. 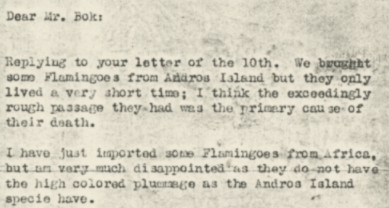 In February 1925, the Miami Herald announced that the aquarium had been sold to Jerome Cherbino as the site for a nine storey, year-round hotel to be called the Floridian. The addition of this hotel also changed Miami Beach tourism by making it a year-round destination, unlike Fisher’s resorts which operated only during the winter season. 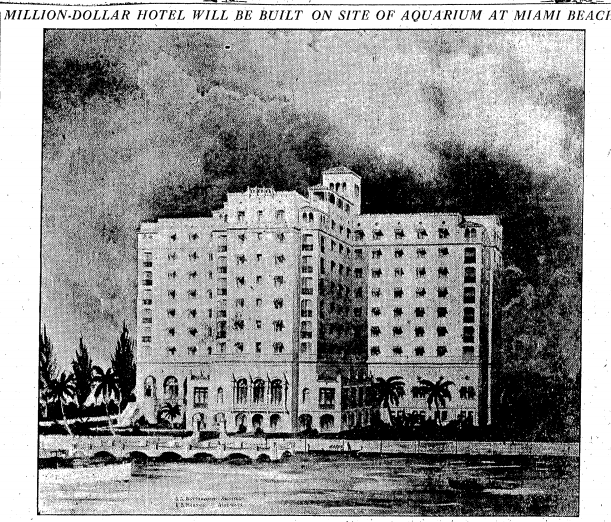 [Note: The illustrations are from online sources and included here for educational purposes.]

The history of Opa-locka has been one of many ups and downs, but it is currently experiencing a historic preservation revival thanks to dedicated residents and stakeholders. Founded in 1926