Our Positions at the Nov 10th 2020 Historic Preservation Board

Webinar link: https://miamibeachfl-gov.zoom.us/j/88038126471, or dial in via telephone 877 853 5257 (toll free), webinar ID: 880 3812 6471. Members of the public wishing to speak on an item during the meeting, must click the “raise hand” icon if using the Zoom app or press *9 on the telephone to “raise hand”. Members of the public who do not have access to a computer and wish to provide testimony and/or submit evidence in support of or in opposition to an item scheduled to be heard may appear in-person, at the Miami Beach Convention Center, 1901 Convention Center Drive, Washington Avenue Entrance, Room 237 Miami Beach, FL 33139, at which location access to a computer will be provided.

MDPL’s Advocacy Committee has reviewed the following applications and offers these findings for your consideration. Please note, the lack of a position on a project does not indicate support or opposition to that project.

MDPL continues to oppose the design of the proposed new building based on non-compliance with criteria (including setback, height, etc). Ordinance is supposed to apply to preservation of contributing buildings, but this is a vacant lot which is unifying title with adjacent historic structure. NPS Standard #9, new construction shall be distinct and compatible with historic district buildings. Concern about compatibility in design features with the surrounding district. “New additions, exterior alterations, or related new construction shall not destroy historic materials that characterize the property. The new work shall be differentiated from the old and shall be compatible with the massing, size, scale, and architectural features to protect the historic integrity of the property and its environment.”

Modifications to Previously Approved Board Order

The eastern facade is equal in importance to the street elevation. Indeed, there is an interplay between the eastern and western facades that:

In short, the proposed alteration of the eastern facade destroys the design unity of the tower and is the exact opposite to the Interior Secretary’s standards by

PS – to download the Versailles Hotel Historic Resources Report, click here. Please note the east elevation and compare that to the new proposal, which would largely erase the historical elements to the east – even going so far as replacing corner windows with curved windows.

MDPL supports the staff recommendations to deny the application.

MDPL opposes the de-designation of the Palm View Neighborhood. In addition, MDPL questions the validity of the report being presented to the HPB:

MDPL appreciates the Board’s attention in these matters. 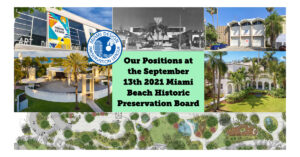 Our Positions at the September 13th 2021 Historic Preservation Board

MDPL’s Advocacy Committee has reviewed the following applications and offers our positions below, highlighted in yellow. [Please note, the lack of a position on a