In 1934, The French Casino at 1235 Washington Avenue was built as a supper and vaudeville club, featuring cabaret acts and showgirls. By 1937, it was converted to a motion picture house by noted architect Thomas Lamb, at a staggering cost of $5 million for that era. Renamed the Cinema Casino Theatre, it was constructed entirely of native keystone. Upon entering the theatre, guests would see a sweeping staircase and etched decorative mirrors. The lobby had a Thonet mother-of pearl bar, with a giant chrome and glass chandelier surrounded by a large artistic mural and comfortable sofas for guests while waiting for the show to begin. Much of the 1,150 seat auditorium was decorated in reds with a Seminole Indian theme on both sides.

During the 1950s and 60s, Miami Beach’s Jewish population grew to more than 140,000, up from just 16,000 before World War II. Yiddish culture grew in popularity in South Florida when South Beach suddenly became a refuge for Holocaust survivors and their disappearing language. Yiddish theatre was declining in other parts of the country, however Miami Beach had six operating Yiddish theatres. The Cinema Theatre would be Miami Beach’s longest running American Vaudeville Yiddish theatre and at the same time would show many double feature MGM classic movies.

In the 1970’s that area of South Beach had become badly declined and subsequently the theatre closed in 1977. The owners wished to demolish the lobby in ’78 and convert it into three separate stores. Local preservationists stepped in, including Barbara Baer Capitman, Leonard Horowitz, Michael Kinerk and Dennis Wilhelm, but they were unsuccessful in their “Save Art Deco The Cinema Theatre” campaign. In 1983, they stepped in again and stronger efforts were made to secure the restoration of the lobby to its original grandeur.

Speaking with early pioneer of MDPL, Michael Kinerk told us, “I was very active in MDPL’s campaign to “Save the Cinema” — and I thought we had failed. I personally spoke to the Brandt brothers (owners) in NYC and appealed to them not to destroy it. They were long-time theatre owning family and did respect the building to some degree. What they did to “destroy it” the first time around was close off the street front entrance and convert it to rentable retail store space. BUT they left the entire auditorium and upper lobby mezzanine intact and undisturbed. They definitely intended to restore it as a real theatre, if MDPL was successful in reviving Miami Beach (as it was). The rectangular one-story space was rented out as a store (shoes, I think). Everything out front apparently was photographed and removed to storage. The inner lobby and entire auditorium which had drywall installed in front of it, was left untouched. When the place was “restored” to be Club Z, they simply removed the drywall partitions and the original theatre still was there. I suspect the chandelier and circular staircase never actually were removed, just paneled over… When Club Z opened it was all there – especially the chandelier and the Paul Thonet “mother of pearl” back bar. I know as I was there at the opening of Club Z. The “original” auditorium sidewall MURALS were either removed, destroyed, or painted over. When Club Z opened, the “new” murals installed where the originals used to be, were wholly new artwork commissioned by club owners and painted by our own MDPL talented poster artist Woody Vondracek.”

After a $2.5 million restoration of the Art Deco Cinema Theatre done by Ira Giller of Norman Giller & Associates, it was transformed into Club “Z” and had its grand opening on March 27, 1984. This new club would be patronized by thousands of young visitors and locals every weekend. Grace Jones, Chaka Khan, Tina Turner, and Miami Sound Machine were just some of the entertainers that performed there.

Over the next couple of decades new owners, along with new names for the club such as Deco’s Nightclub and Level, changed hands frequently. Sadly, over the years most of those original Art Deco elements were removed, including the original marquee tower.

In 1994, rock icon Prince, had ownership of the club and called it “Glam Slam”. In 1996, after a drug raid the Miami Beach Police shuttered the club and it never fully rebounded. In 1997, Prince headed to Glam Slam after his “Jam of the Year Tour” performance at the Miami Arena, for a post-performance blow out. About a decade later, on March 18, 2006, Prince performed again at the then-Mansion Nightclub.

One patron fondly remembered when the club was called Paragon, “it had two swimming pools installed on the stage with mirrors above it. Dancers who worked there would dive into the pools and swim around like it was an Esther William’s movie.”

In 2004, the space was to be reopened by The Opium Group and renamed Mansion. Mansion was one of the first clubs to place couches and tables for bottle service directly on the dance floor. It had a long run of music and parties for the next eleven years. In 2015, ownership changed hands again and became the Icon nightclub. However, this new club officially shut down after only nine months of business. The last known club at this location was the Copa Room Miami, that closed its doors a few years ago. Currently the space is vacant and for lease.

What would Miami Beach be like without Historic Art Deco, Mediterranean, and MiMo buildings?

Join Us: Become a Member

Help MDPL remain independent and sustain our mission to preserve, protect, and promote. Annual memberships start at $50 and include free walking tours and more.

Firehouse No.4 in Miami

Every year from 1978 through the 1990’s, there was a black-tie bash in Miami Beach benefiting the Miami 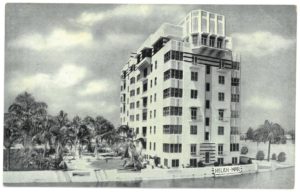 The Splendor of the Helen Mar