July 2020 we honored what would have been the 75th birthday of Leonard Horowitz. Thirty-one years ago on March 10th, 1990, a special ceremony was held by the City of Miami Beach to name 11th Street and Ocean Drive, “Leonard Horowitz Place”.

Leonard Eugene Lazar Horowitz was a young furniture designer from New York, who created window displays for Bloomingdale’s and studied architecture. When Horowitz was 29, his father cut him off financially after discovering Leonard was gay, prompting him to move to South Beach to live with his mother.

In Miami, he met and formed an unlikely bond with Barbara Baer Capitman, who was thirty years his senior. They both shared a passion for preservation, design and Art Deco buildings. Horowitz helped Capitman co-found the Miami Design Preservation League in 1976. However, his contribution went well beyond that. Wanting to save the beachfront from flashy excess and to highlight its building’s unique design features, Horowitz created a pastel color palette to be used for painting the weathered, forgotten buildings. “I formulated my palette on the basis of sunset, sunrise, the summer and winter oceans and the sand on the beach, which used to be much more golden,” he said. “They all are natural sources, and they are the same ones that the original designers used. Within them are an infinite variety of pastels.”

Horowitz presented his palette to the director of community development and asked if they could try out the colors on the white monotone Friedman’s Bakery on the corner of 7th and Washington Avenue. The initial reactions weren’t too positive, but Horowitz eventually won the community over. In 1982, Friedman’s Bakery was featured on the cover of Progressive Architecture magazine. As a result, South Beach became a popular backdrop for photo and model shoots as well as TV shows like Miami Vice. In 1985, the Breakwater hotel was chosen by photographer Bruce Weber, for an iconic photo shoot & commercial for Calvin Klein’s perfume “Obsession”.

Thereafter, Horowitz’s tropical colors attracted international attention, as Art Deco building after building were restored in his pastel palette. Sadly, four years later in May 1989, Horowitz died from complications of the AIDS virus at age forty-three. “Without Lenny, the Art Deco District would not have the same kind of vitality, imagination and aesthetic,” said developer and close friend Tony Goldman.

In 2016 Savino & Miller Design Studios won the competition to design a new LGBT crosswalk for Ocean Drive. Inspired by Leonard Horowitz’s color palette and his work in developing the Art Deco District into the iconic neighborhood it is today, it was installed in October 2018 on the west-side corner of 12th Street.

What would Miami Beach be like without Historic Art Deco, Mediterranean, and MiMo buildings?

Join Us: Become a Member

Help MDPL remain independent and sustain our mission to preserve, protect, and promote. Annual memberships start at $50 and include free walking tours and more. 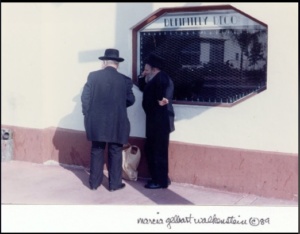 In the early 80s in the Art Deco Historic District, in the lobby of the Washington 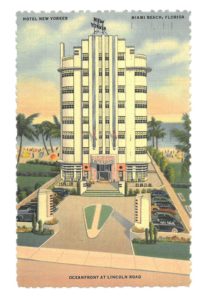 The New Yorker Hotel once stood at 1611 Collins Avenue. It was the destruction of this 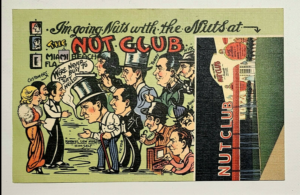 The “Nut Club”, known in the 40’s as “The Gayest Spot in Town” with “Continuous Screwey